All Sufferings are the Impetus for Growth

“There are many ways to be filial to your parents, and one of them is to chant Nam-myoho-renge-kyo!” These were the words of a Women Division leader who encouraged me to practise Nichiren Buddhism. That was when my mother was diagnosed with terminal lung cancer shortly after she came to live in Singapore from Malaysia. The doctor said she only had six months to live. That senior in faith gave me hope in my most dire situation. Deeply touched by her sincerity, I chanted an hour daimoku that very day, thereby commencing my faith journey that is 27 years to date. My mother passed on peacefully after three years.

In July 1994, on the day I received the Gohonzon, my Men Division district leader quoted a passage from the Gosho to encourage me, “ ‘If you want to understand the causes that existed in the past, look at the results as they are manifested in the present. And if you want to understand what results will be manifested in the future, look at the causes that exist in the present.’ (WND-1, p. 279) The ‘present’ is the result of the past and the cause of the future. This present moment contains three existences of eternity. So, it is important to change your thoughts now. Your current determination and action forge the reality of your future. You must not give up faith.”

When I became a district leader, I had to look after the Young Men Division (YMD) members, support the organisation’s activities, and carry out the Young Lions’ (YMD logistics team) duties. Besides that, I had to work long hours, take care of my mother, and chant at least two hours a day for her health. Very often, I had only three to five hours of sleep a day. In retrospect, those were precious experiences during my youth.

Ikeda Sensei said, “Over time, those experiences (in youth) will train you and foster the strength that is the underlying toughness you need to face all of life’s challenges. This will eventually become your good fortune. That’s why struggles are actually life’s greatest treasure.” (NHR vol 24, “Vigilant Safeguarding” chapter) This guidance has been my motto in life.

Achieve Breakthrough Based on Faith

To increase my income to pay off my mother’s substantial medical bills for three years, I requested my boss for a job transfer from interior design to marketing to get the extra commission. With my introverted personality, lack of confidence and marketing experience, my chances of success in such a competitive industry were slim. However, I was determined to employ the “Strategy of the Lotus Sutra”, based on faith and daimoku, to make a breakthrough in my career.

In 1997, my company had an opportunity to tender for a multi-million dollar interior design and renovation project. My team and I exerted our best on the design, quotation, and engineering details. In the face of this difficult challenge, even though I was exhausted by the time I reached home late at night, I persevered to chant an hour daimoku, praying for a breakthrough in my career to achieve victory. The power of the lion’s roar daimoku filled me with hope, and the more I fought, the stronger I became. Ikeda Sensei said, “Hope exists even in the midst of adversity. In fact, only when you undergo the ordeals of adversity will your hope be truly fortified. ”

We finally secured the project. Although my boss and colleagues could not believe it, I was sure that it was actual proof of the courage and wisdom manifested through faith.

After consistently challenging breakthroughs at work through my Buddhist practice, I achieved extraordinary results for my company in those years, thereby laying the foundation for my career, and my financial situation improved. My wife, family members, and friends saw the changes I made based on faith, and they soon joined me to practise Nichiren Buddhism.

Spreading the Message of Hope with Empathy Dialogue

In April 2020, the circuit breaker, instituted for the Covid-19 pandemic, hit 90% of my company’s business. All the staff had to take a 10-20% pay cut from June. I continued to chant earnestly every day to manifest wisdom, continually thinking about improving our marketing strategy, and attain the highest life condition to lead the team based on the spirit of treasuring every individual while encouraging and working along with my colleagues and shareholders.

I had always refrained from talking about Buddhism with my colleagues at the workplace. However, SGS’s “Together We Dialogue” campaign in early July 2020 was an opportunity for me. I strived to dialogue with my colleagues, suppliers and customers to find out how they were coping and offer encouraging words.

As the circuit breaker was lifted and we entered into Phase 1 measures, at the end of June 2020, we could return to work in the office. I realised that morale was low and communication was extremely inefficient among colleagues which affected their work progress. Some of my colleagues were frustrated by the financial difficulties as their family members had also lost their jobs. I gathered the courage to encourage them through “empathy” dialogue.

Once during the weekly internal operation meeting, I talked with a team of five young designers. I boldly shared Buddhist teachings to encourage them to make changes in their work and to do their best to get through this challenging time together with the company. At the same time, I also talked to them about manifesting their greatest potential and the spirit of altruism at this critical moment. I also assured them that the management would take care of them. In that meeting, I shared based on the spirit of empathy and encouragement. I could see their faces light up, and they felt more confident about the company after my sharing. In the following days, I saw that they were more motivated at work.

Besides that, one of the supplier’s staff became distraught after being laid off. The family of five, including his wife and three children, was greatly affected. I encouraged him to have hope for the future and confidence in himself to achieve a breakthrough. I shared with him how I had bravely faced my numerous difficulties through the practice of Nichiren Buddhism. During the conversation, he was able to perceive that although we were both facing the same kind of problem, our outlook and approach to solving them were different. He was encouraged to see a Buddhist practitioner who will never be defeated.

The pandemic affected the company’s turnover, and my income was gravely reduced. By September, although the company managed to recover only up to 60% of the previous turnover, my management saw my dedication and efforts during this current predicament, and they surprisingly raised my salary by 50%, which was initially reduced. That was out of my expectation.

Buddhism teaches us to embrace faith like flowing water. As I journey through life with this faith attitude, I realise that a life without problems and suffering does not lead to happiness. There is neither human revolution nor a transformation of karma, nor does it lead to any growth. There is indeed growth after encountering difficulties, as shown in the Daishonin’s words, “they are burning the firewood of earthly desires, summoning up the wisdom fire of bodhi or enlightenment” (The Record of the Orally Transmitted Teachings, p. 11). It is by overcoming the three obstacles and four devils that one can experience true peace and happiness. Nichiren Buddhism teaches us to bring forth the life force to overcome suffering, and that is the purpose of Buddhism. 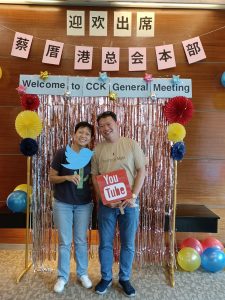 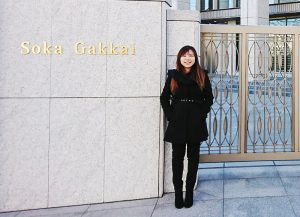 Becoming the Cheerful Sun of Happiness