Becoming the Cheerful Sun of Happiness

Since young my mother often shared Ikeda Sensei’s guidance with me and brought me to meetings. As the meetings were conducted in Mandarin, I never understood much of what was shared. Like most young children, I chanted only during examination periods.

It was when I turned 17 that I started pondering on the true purpose of life. One of the Singapore Polytechnic Student Division (SPSD) seniors approached me to attend the SD school-based activities. I was reluctant, but knowing that my second brother had started attending Soka Gakkai activities, I decided to give it a try. At one of these activities, the realisation on the true purpose of life dawned on me: to live for the happiness of oneself and others. I truly felt it was a noble yet sensible cause. It was for precisely this reason that I decided to take this practice seriously.

Transforming into A Better Person

Taking part in SGS activities brought many unforeseeable benefits. Other than feeling an immense sense of joy, I transformed into a better person. Because I knew I had to split my time between studies and activities, I became clear-headed and objective-driven, which allowed me to complete tasks quickly and efficiently. In addition, from Sensei’s guidance, I learned the significance of dialogue to achieve mutual understanding between individuals. So, when there were conflicts among my teammates, I always initiated dialogues to understand, even if it was the most challenging thing.

After just one year of active participation in SGS activities, my tutors saw the difference in my attitude and behaviour and entrusted me with various tasks and responsibilities. I became an ambassador for my faculty and took part in activities like Freshmen Orientation Camp, Open Houses, and gave encouraging speeches to juniors.

As I pursued a design course, I often stayed up until the wee hours to complete my projects. Even so, I continued to contribute to SPSD whenever an opportunity arose. It was then that I understood the concept of absolute happiness and what it means to expand my life — I found joy in every minute of my struggles until they no longer seemed like an obstacle. I became more confident and was able to accomplish more than I thought I could and even helped my friends at the same time.

I firmly believed that a life lived for the sake of other people’s happiness is so much more meaningful than one lived solely for one’s own happiness. Therefore, when I was approached to be a Campus IC, I accepted without hesitation, simply because I wanted to repay my gratitude to my seniors who had guided me and help others to feel the joy inherent in this practice.

I started attending home visits with my SD seniors and eventually began having dialogues and reaching out to students independently. Whenever I met someone new, my wish and intent were always the same — that I wanted them to know that there is such a wonderful Buddhism that will enable anyone to become happy.

In my 3rd year in the polytechnic, I took up the role of a trainer in that year’s National Day Parade (NDP) performance. Although it was challenging, completing my Final Year Project while managing the schedule of the NDP training, I managed to overcome many challenges together with my fellow trainers and participants, with whom I forged close bonds.

Practice for Others — the Bodhisattva Way

That same year, I was approached to become a district leader. However, I felt inadequate to take care of members who could be twice my age. Then, I came across an episode in The New Human Revolution where Sensei assumed the presidency of the Soka Gakkai when he was only 32 years old. It gave me the courage to eventually take up the role, which became another platform that spurred my growth. Thanks to the constant encouragement from my seniors, I exerted my utmost in kosen-rufu activities without neglecting any aspect of my life. As a result, I achieved a high grade point average (GPA) of 3.91 and entered the National University of Singapore (NUS) to pursue the course of my choice.

Being a district leader, the greatest challenge was reaching out to members older than me. I chanted abundant daimoku to manifest wisdom and courage to carry out dialogues with them and also write letters to them. Even though the responses were not so forthcoming, my seniors encouraged me to not be defeated and continue to share Buddhism.

With renewed determination, I seized all opportunities to share Buddhism with my friends. During the 2018 SGS Youth Summit, I invited eight friends to the festival, and they were all incredibly inspired by the spirit of the SGS youth. One of them was my secondary school friend, whom I had lost contact with for over seven years.

I was so happy when she started to attend activities to understand more. I believe that as long as I continue to water the sowed seeds of happiness, through the connection formed, the seeds will grow.

I became Future Division (FD) helper in 2017 while pursuing my Master’s Degree. I was apprehensive at first, but after meeting these precious young individuals, I decided to help guide them as they face challenges. I wanted to be there for them just as my seniors and district leaders did for me when I was lost and alone.

I was keenly aware of this golden opportunity to rejoin the Future division and contribute (as I was never active in Future Division). I was overjoyed to see the growth of the students within a brief period, and was profoundly encouraged by their warm-heartedness and pure-hearted faith. They are a constant reminder that it is worthwhile to give my best to fulfil my mission in Gakkai no matter what happens.

In 2018, I had the opportunity to visit the Hall of the Great Vow for Kosen-rufu in Japan, where I made my vow to exert my utmost for kosen-rufu wherever I am, and to never leave the organisation no matter what.

I have always kept the five eternal guidelines that Ikeda Sensei had presented to the Young Women Division (YWD) close to my heart. One of which is “be cheerful suns of happiness” in which Sensei encourages the YWD: “In life, there are also rainy days, cloudy days, and stormy days. No matter what happens, however, it is important that you continue shining brightly as suns of happiness. You can illuminate the lives of everyone around you, now and in the future, with the brilliant light of hope, courage, and victory. I hope you will forge such a state of life while you are still members of the Young Women Division.”

After graduation, I landed a job just within a month and got into a company where my specific prayers — to have good supervisors and seniors who would guide me at work, decent pay, and a job that allows me to do kosen-rufu — were answered. While I still struggle at work, my proactive and respectful attitude have always been a constant factor my bosses, and colleagues praise me for.

In the ten years since I have actively participated in SGS activities, the compassionate spirit of all the
precious seniors and comrades has encouraged and inspired me, without which I would not have learned so much about Nichiren Buddhism and achieved many victories. Furthermore, my family remains my pillar of strength who always guide me back to faith no matter what we are going through. I am deeply thankful to have grown up in a Gakkai family and to have these eternal comrades of faith by my side.

As the newly appointed assistant region leader in FD, I vow to exert my best for kosen-rufu and foster capable successors of Soka, who will advance kosen-rufu on the front lines towards the 100th anniversary of the Soka Gakkai in 2030. 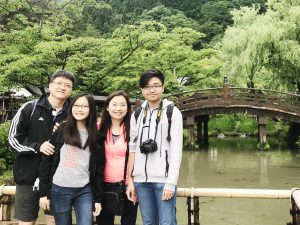 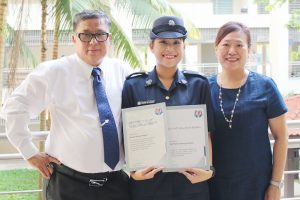